This seventh chapter focusses on historical drivers (1/3).  We will focus on the first step:

What happened in the past? Do we witness recurring schemes? Cycles on-going? Chance roles? 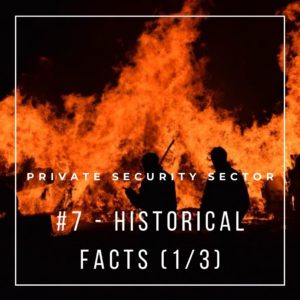 The method used is taken from Richard A. K. Lum’s “4 steps to the future”* approach.  This is the first step in looking at what happened.  This does not augur the future, but potentially could identify :

and having impacted the present.

First step consists in building the timeline.  What events made the headlines?  Legislation, wars, crises will be captured.

We have chosen here the regulations relating to private security as milestones and have therefore divided the “past” into 3 periods, each preceding the publication of new legislation.

It is usual to study a period equivalent to the period of anticipation of the future (i.e. 12 years) but here we have preferred to go further back in time in order to verify the repetition or not of the variables and phenomena over a longer period.  This is also justified by the fact that technological changes have accelerated and that a period of duration “d” in the future corresponds to a period of longer duration in the past.

This exercise was carried out alone, as were the rest of the steps.  For the first stage, in terms of fact-finding, the result is probably close to what we would get with a wider consultation.    It is certainly embryonic for the other steps and should therefore be seen as a first illustrative draft that would have to be (in) validated during interviews and/or workshops.

1930s: The rise of private fascist milice prompted the legislator to intervene and promulgate the 1934 law banning private milice.  There will be two major grievances: the lack of control and punishment.

1980s: the development and growth of private property accessible to the public such as industrial, commercial or leisure centres using private security on the one hand and the rise of terror with the “Brabant killings” on the other hand.

mobilizing the attention of the police forces on the other hand will form the breeding ground for the 1990 Act on security companies, internal security services and security companies also known as the “Tobback Act”, the Home Secretary at the time.

The sector needed to be cleaned up and legitimized, particularly in terms of the morality, training and skills of the people working in it.  In addition, the grievances against the law on private milice have been lifted since controls and sanctions are provided for in the new legislation

1990s: the Dutroux criminal case took place in Belgium in 1996.  Beyond the victims of course, it dramatically impacted the civil society and had worldwide repercussions.  The main protagonist, Marc Dutroux, was convicted and sentenced for raping and murdering young and teenage girls, as well as for paedophilia.

This case showed dysfunctions of justice and police rivalries causing major upheavals and leading to the reform of the police in Belgium. It is not directly linked to private security but with security forces.

Years 2000: Acts of terror are frequent and take various forms, both physical and informational, especially for countries engaged in the fight against jihadism in the Middle East. The feeling of insecurity is present and growing.  The confidence of citizens in the police force is undermined. Private security suffers – again and again – from a bad reputation.